As in restaurants so in news

For many of us in the online news biz, hyperlocal is a promise often made but seldom fulfilled, the dream of using the web to connect a local community around news and information. Oh, and saving journalism in the process.

Given low margins and significant scaling issues, venture capital hasn’t exactly flooded the field. As Fred Wilson had said even back in 2008, hyperlocal “isn’t going to happen quickly.” Ten years later, we know that’s the truth.

I feel optimistic that we (the people!) are almost ready.

As the crossover approaches, the pace of change will accelerate (*again, like it had ~2008), and legacy media writ large will spasmodically churn through the myriad structural issues limiting widespread digital transformation. Profitable digital publishers gathering audience today will be well positioned to capitalize tomorrow. Local media musical chairs, perhaps, but find your spot and protect it. At a local level, we are starting to see this change. Forget the hot startups of the month from Silicon Valley; just take a survey of the highest grossing publishers in LION.

The platform is my shorthand for the software/utopian vision connecting the newsroom to the audience (as well as the audience to itself). Patch, EveryBlock, Hoodline, NextDoor, Facebook, etc. They all have a claim to this mantle. But the genius here won’t be the evolution of power, but its devolution. Not recreating the platform as a destination itself, but as a platform of platforms.

Consider this slope chart from Yelp, showing the increasing taste for independent restaurants: 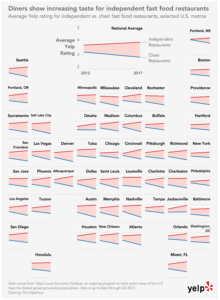 Historically, chain growth has outpaced the broader restaurant industry growth, but in the past three years we’ve actually seen independents and smaller operators outperform chains. It’s clear that consumers are voting with their dollars and are rewarding those restaurants that provide a resonating point of difference in the overall experience.”

The scale of the consolidation problem in news is enormous:

Ownership matters. Since radio and TV transformed us into a mass audience, our media too has gravitated towards consolidation. But as in the restaurant industry, it may be possible to elicit a change in consumer behavior. What would it look like to inspire Americans en masse that they should read local?

Chris Wink’s Ph.ly project is one such strategy. Using resources from the Lenfest Foundation, Wink is advertising the membership campaigns of a few different independent media outlets in Philadelphia. What would a local news Got Milk campaign entail?

I’ll be writing more about this at NewsroomInABox.com, my upcoming project to document the what/why/how of starting a local digital news site. And if you need help getting your own operation going, you can find me at Philly Publishing.

I’ll be writing more about this at NewsroomInABox.com, my upcoming project to document the what/why/how of starting a local digital news site. And if you need help getting your own operation going, you can find me at Philly Publishing.