I wrote recently about why ownership matters in media. This post is a followup.

A number of technologists have imagined the platform that might make it easier for journalists to pursue their livelihood by handling all the non-editorial work/monetization for them (and delivering a better UX & business model in the process).

Time and experience have changed how I view this platform idea. A few years ago, I felt extremely bullish on the prospect of a high-growth local news/info play that could be made into a big company. The incongruity between the social importance of local and its existing monetization performance suggested that there were fortunes to be made on that difference. Could there be a next Gannett? It seemed to me like Jeff Bezos wouldn’t mind this role. Neither would I – hey, it’s good to be the king!

But there is a king already (Gannett), and even if their quarter to quarter looks as bad as they do now, they won’t give up their hegemony without a fight. The consolidation of financial interests across the rest of the sector is as scary – ComBuzzVoxNBCU, TrinClair, MicWPP, etc. Paper money orchestrated by the same people that screwed us over last time. Or if you don’t like that slightly leftist phrasing, think of the problem from a pure economical analysis of the information economy, we’ve got a media environment approaching oligopoly. 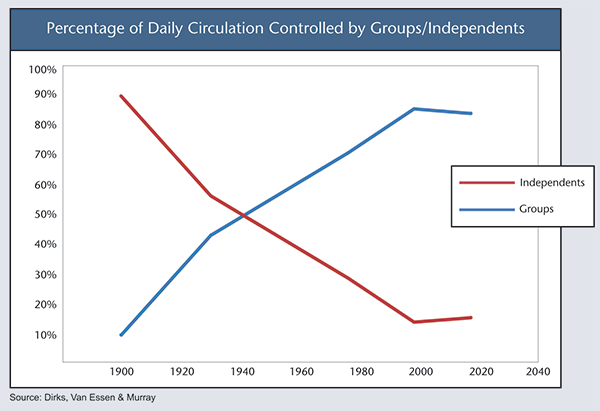 There aren’t many good publishers these days, and that’s not just my opinion. In addition to the consolidation demonstrated above, there’s a growing sense that nobody speak – smarm won as New York’s digital reporter & producer underclass got slowly sucked into extant newsroom cultures & conglomerates. Choire’s running the Style section for G-d’s sake. The verve of early blogging no longer an identity but a tactic, faux counter-culturalism designed to elicit engagement. I pine for the muckrakers.

What’s the slingshot? How do we take down a legion of goliath and empower small local publishers? How might we help publishers realize the economic benefits of consolidation while maintaining independence?

A few weeks ago at SRCCON, I learned about the Park Slope Food Coop, and it inspired some lateral thinking about how the framework of coops might be applied to news organizations. The 7 principles of coops were new to me, and so they might be new to you, too.

I really dig these principles, and they seem to rhyme with the values of open source, too.

Here’s a problem I tweeted yesterday.

Open source is typically time consuming and distractive from your main business objectives.

At the same time, open source is powerful, and can lead to measurably better software outcomes.

For small media companies, choosing which software they open source can seem risky in opportunity cost and competitive advantage. And sure, you could try one-off partnerships with organizations, but partnerships typically entail significant coordination cost.

The coop model would hire a professional staff to maintain the technology stack and possibly other non-core business functions, like HR, payroll, taxes, etc.

To promote upstream contributions, the concept of sweat equity could be applied to technology so everyone in the network has incentive to better the whole. I’ve even wondered if a blockchain could be used to track the contributions of members over time, essentially capitalizing the co-op through in-kind contributions of time and code. The coop could have an ICO to fund initial development of the platform. Whether a classic coop or a newer “programmatic” coop based on blockchain, the insight is aligning participation/contribution with voice/stake. By capitalizing the coop in this way, we also create an economic framework for transitioning a “seat” to another publisher based on free market pricing of the coop coin.

By addressing the tragedy of the commons (for no one actor is it rational to maintain the open source community) we can create a coop-level open source project wherein developments are shared for the exclusive benefit of member organizations. The same goes for whatever other workflows or products the coops request; specific approaches and the ethics of programmatic advertising and data management platforms aside momentarily, it’s generally a true statement that the more data you have a consumer, the more effectively you can monetize them.

Other benefits to this coordination include bulk contracts with vendors, knowledge sharing, and potentially content sharing as well. Simple geographic buffer zones around member outlets could create scarcity around the seats and prevent in-market competition between coop outlets. Regional clusters seem like they’d be an outcome of this approach & that seems okay to me, independent publishers of that stature could play an important role in our nation’s overall political economy. Publishers in a corollary Gannett cluster do not have that ability.

This is a disruptive idea because it optimizes for local growth rather than corporate profits. I have some idea about how we might ensure that our local outlets are also equitable in the distribution of their revenue to staff, but I’ll save that for a later post. At this point I’d simply like to hear what you think in the comments.

Update: The “moment of inspiration” described above at SRCCON is probably overblown. Gabe Stein of Massive points out that he mentioned this idea (and related it to Visa) in the conversation with Sean & Noah referenced in the Platform post. I hope it’s a good sign that a bunch of us are thinking about this simultaneously!